Credit Suisse Chief Executive Tidjane Thiam, ousted over a spying scandal, stands to collect as much as 30 million Swiss francs ($30 million or £23.5 million) after resigning this month, two people familiar with the matter said.

The compensation for Thiam, including pay, bonus and stock options, marks the end of a five-year reign at Switzerland's second-largest bank that ended after a split with the chairman following revelations of spying on top managers.

Thiam has denied any knowledge of staff surveillance, which first came to light in September when former executive Iqbal Khan confronted a private detective who was following him through Zurich.

The package would make Thiam, who has on average been awarded roughly 10 million francs annually by the bank in the three years to 2018, one of the highest-paid European bank chiefs. Credit Suisse declined to comment.

High executive payouts at the bank have irked its investors, prompting a protest in 2017. During Thiam's tenure, its share price has fallen by almost half as it raised fresh funds from investors.

Thiam, however, is entitled to the money because he is resigning from the bank this week officially on good terms, which means there is no need for the management board to dock his pay.

He nonetheless departs under a cloud. Although Credit Suisse cleared Tidjane of snooping on former star manager Khan, the suicide of a private investigator involved and the emergence of a second spying case as it sought to draw a line under the first sparked an outcry in Switzerland.

The scandal rattled faith in the Swiss bank, a pillar of the local economy that was founded to finance the building of the nation's rail network that tunnels through the Alps.

Credit Suisse has said Thiam was unaware of the surveillance and that former Chief Operating Officer Pierre-Olivier Bouee, a longtime Thiam aide, initiated it in a solo run. He was since fired and has not commented publicly.

Ultimately chairman Urs Rohner won board backing to ask Thiam to leave, according to people with direct knowledge of the matter.

For many investors, Thiam leaves behind a mixed legacy.

"He took out 4 billion francs of costs. That was critical," said Andreas Venditti, an analyst at Vontobel. "On the downside, he had to cut his original targets because they were too optimistic."

As he handed over to his successor on Thursday at a press conference, Thiam took issue again with what he described as false reports, including one that he had chartered helicopters for work.

"I've given five years of my life to this company, it's not nothing," he said. "Now I'm going to go and get some rest." 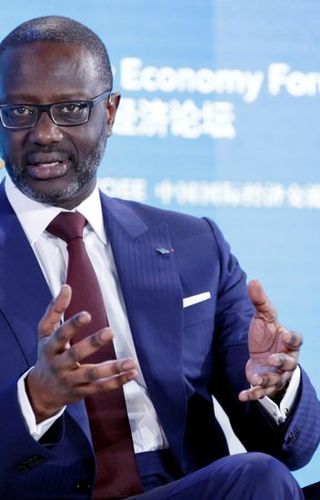