Political risk is again emerging as a major source of market instability in Brazil, as a series of setbacks for President Jair Bolsonaro sucks the life out of a broad-based recovery that had appeared to be gathering momentum following March's market crash.

Brazil's status as the world's No. 2 COVID-19 hot spot, Bolsonaro's mishandling of the pandemic, his battles with the Supreme Court and Congress, and cabinet resignations have thrust Brasilia firmly into investors' line of vision.

The growing sense of disarray is unnerving investors who fear Bolsonaro's constitutional and institutional spats will put the government's economic reform and austerity agenda on ice, and possibly into a more permanent deep freeze.

"Markets are starting to look at the politics again," said Alexandre Song, partner at Macro Capital, a hedge fund in Sao Paulo.

"The price action hasn't been too dramatic so far, but it is deteriorating. It feels like markets are partying next to a live volcano, and there's smoke coming out," he said.

The exchange rate and currency volatility, good real-time gauges of wider market jitters, reflect Brazil's underperformance in recent weeks. The real has fallen 12% against the dollar from its recent high on June 8, more than its peers and in many cases significantly more. 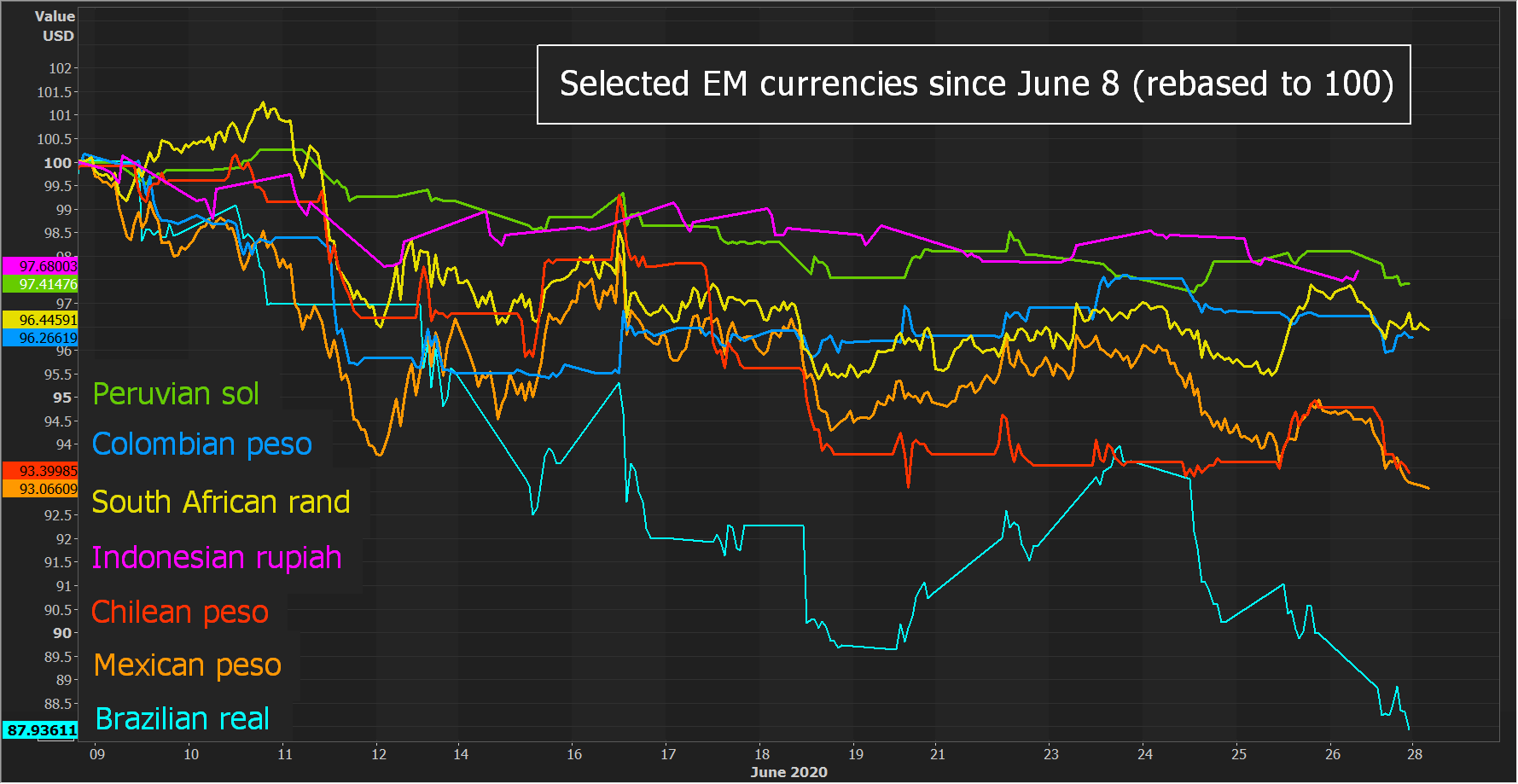 Volatility, meanwhile, has shot up almost to the levels it reached at the height of the global market crash in March.

Implied volatility on one-month dollar/real options last week rose to 25%, the highest since March, when it reached 30%, and on Friday three-month implied volatility spiked to 21.7%, even closer to the March peak of 22.5%. 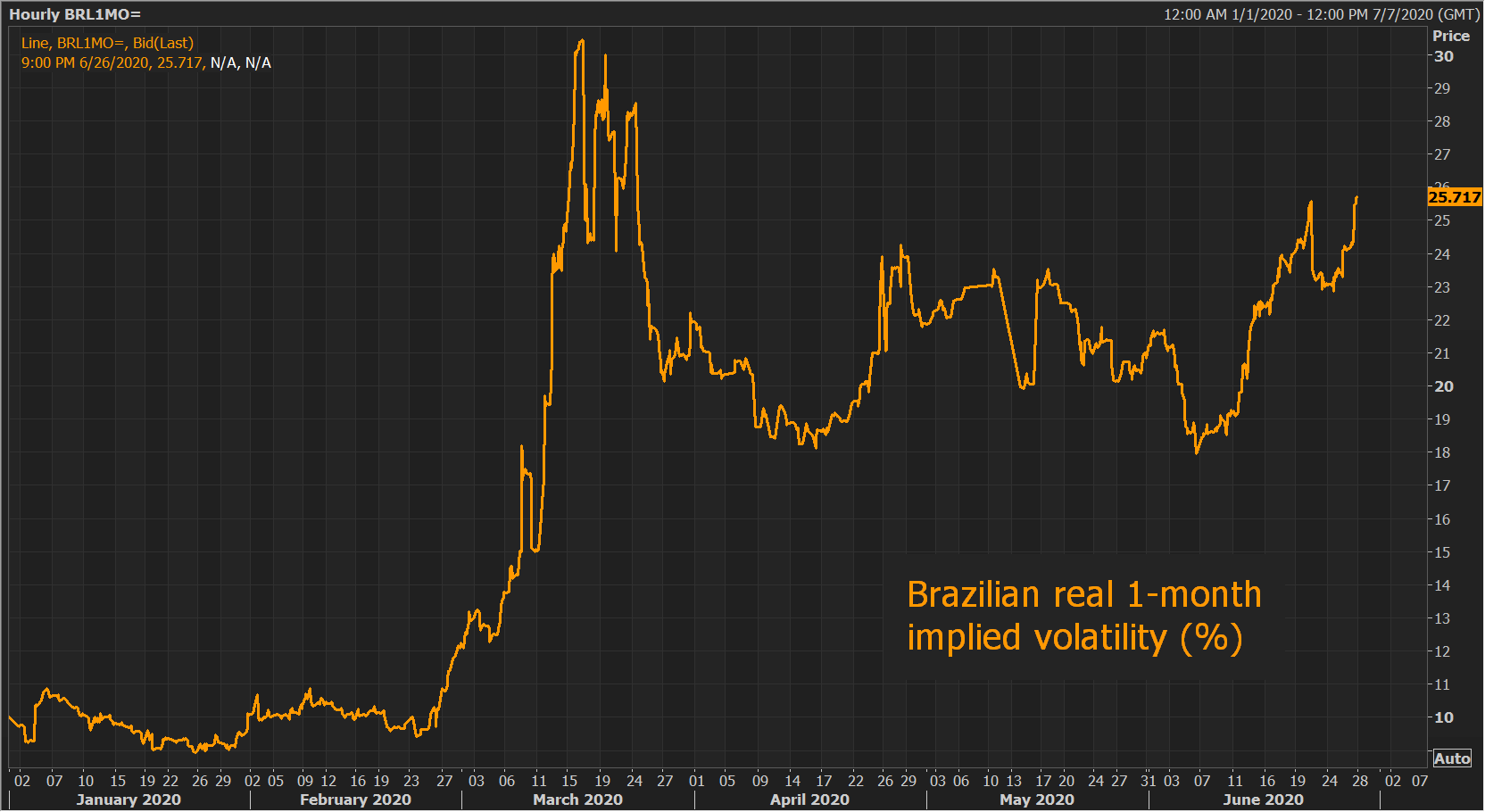 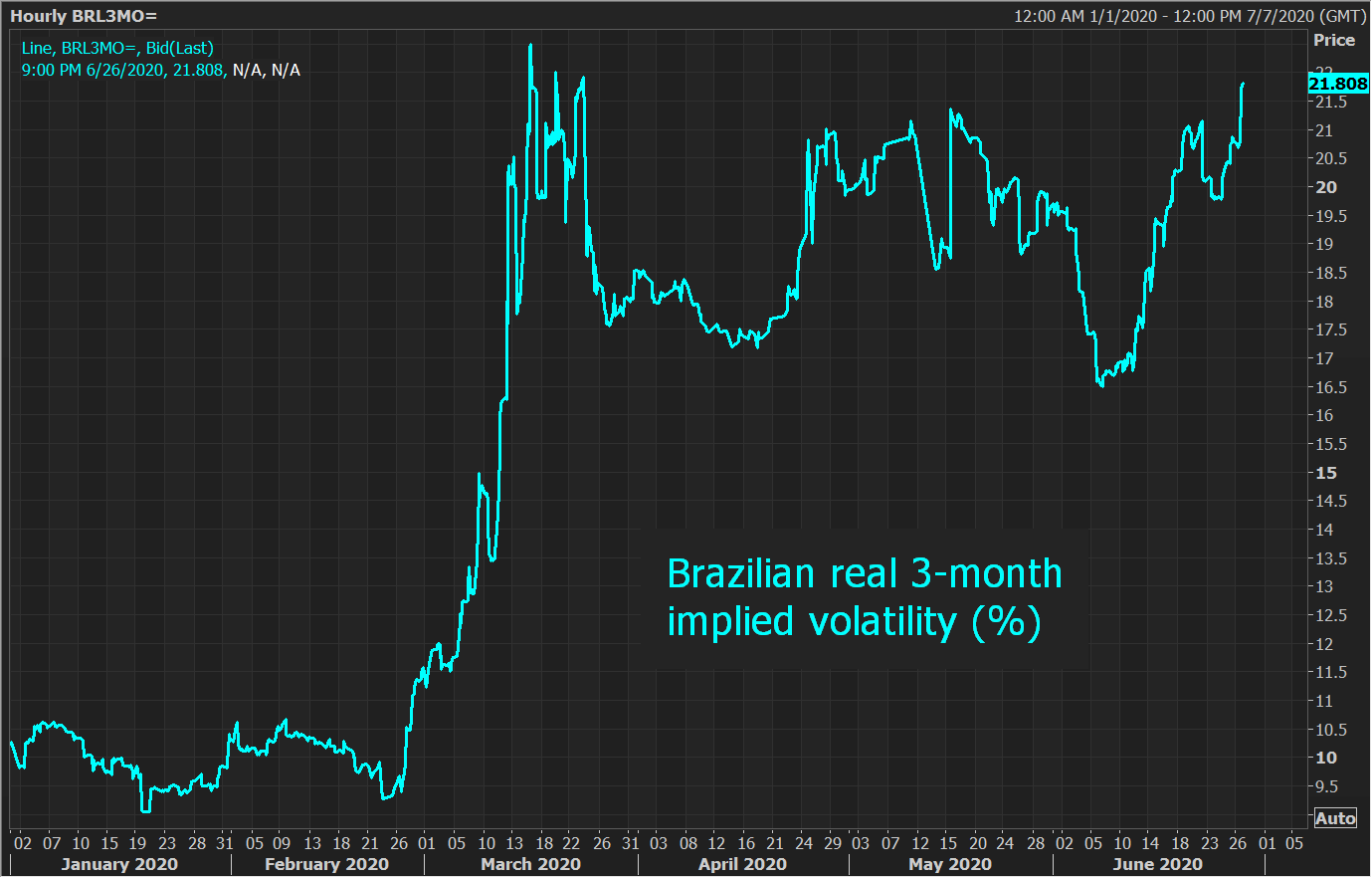 The economic and public health issues Bolsonaro is grappling with are not unique to Brazil. The world is tipping into its deepest recession in decades, the COVID-19 pandemic knows no geographical boundaries and people are dying around the world.

But according to Thomaz Favaro, director at Control Risk, a political risk consultancy in Sao Paulo, Bolsonaro's handling of the crisis has put him in a select band of world leaders whose approval ratings have fallen during the pandemic.

"We now have a political crisis on top of a health crisis and economic crisis," Favaro said.

"Very few countries have had such a dysfunctional response to COVID as Brazil, and that is adding fuel to the fire in the sense that 'When is the economic recovery going to begin, and how steep or not will that recovery be?'" he said.

Even lingering speculation about military intervention to tighten Bolsonaro's grip on power, however unlikely, has not disappeared.

The economy is headed for its biggest crash since records began 120 years ago. Emergency spending, meanwhile, will push government debt to a record high, while the number of confirmed coronavirus cases passed the 1 million mark and more than 57,000 people have died.

Brazilian assets have rebounded from the March lows, in line with the global market recovery. But the benchmark Bovespa index is still 20% lower this year and the real is down 25%, while the spread between short- and long-term interest rates is still more than double what it was in January.

Brazil's pre-pandemic position was weaker than in many other countries, with anemic economic growth, high national debt and a fractious political climate.

In the last two weeks, respected Treasury Secretary Mansueto Almeida said he would step down, controversial Education Minister Abraham Weintraub quit and police arrested a former aide to Bolsonaro's eldest son in a graft probe that threatens to undermine the president and ratchet up his battle with the judiciary.

None of these events on their own might have made any market ripples. But together, against a backdrop of recession and public health emergency, they packed a punch.

"The pandemic has exposed some of the government's fragilities, although this is not just an issue in Brazil. It's a really fragile situation," she said.