AIG, one of the largest insurers in the United States, posted an underwriting income of $12 million (£9.2 million) in its general insurance business for the quarter, compared with a loss of $1.07 billion, a year earlier.

Underwriting income is the difference between premiums an insurer collects on policies and claims it pays out.

Chief Executive Officer Brian Duperreault, who joined the insurer in 2017, has been overhauling the underwriting culture at AIG's general insurance business through initiatives including raising rates and shedding unprofitable lines.

AIG's general insurance accident year combined ratio, a key metric, which excludes changes from losses incurred in past years, was 95.8 for the quarter, compared with 98.8 a year earlier.

A ratio below 100 means the insurer earned more in premiums than it paid out in claims.

"It's hard to say given all the issues at AIG over the last decade-plus, but I honestly can't remember the last time AIG had a full year underwriting profit," Duperreault said on a call with analysts.

AIG expects to invest $1.3 billion in the company through 2022 as part of an effort to modernize technology and processes while cutting expenses, said Peter Zaffino, AIG president and chief operating officer. The programs will deliver $1 billion in savings by the end of 2022, he said.

The changes will play out through 10 programs, including building a new underwriting system in the general insurance unit and transforming AIG's Japanese insurance business into a "next-generation digital insurance company," Zaffino said.

Net income attributable to the company's shareholders was $922 million, or $1.03 per share, in the fourth quarter ended Dec. 31, compared to a loss of $622 million, or 70 cents per share, a year earlier.

On an adjusted basis, AIG earned $1.03 per share, beating Refinitiv estimates of $1.00.

The insurer also said it expects to pay $1.7 billion as part of a tax settlement with the U.S. Internal Revenue Service, which could be made as early as the first quarter of 2020.

The settlement amount, which AIG had previously disclosed, is related to cross-border financing transactions dating back to 1997.

By C Nivedita and Suzanne Barlyn 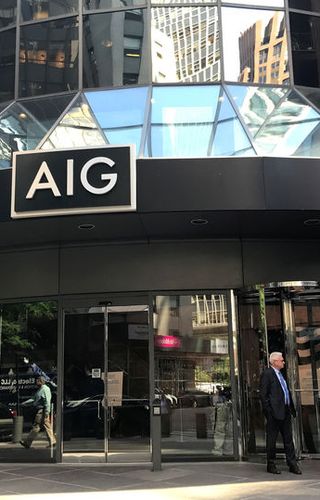