A weaker sales outlook for the military transporter led to a 1.21 billion euro charge and will continue to weigh in coming years, Airbus said on Thursday. Its full-year loss also reflected a provision for last month's $4 billion settlement with prosecutors over past corrupt practices.

Airbus turned in a "strong underlying financial performance", Chief Executive Guillaume Faury said, and will focus this year on operational and cost improvements as well as "reinforcing our company culture." Airbus shares were down 1.3% at 1002 GMT.

Airbus is well placed to benefit from the crisis surrounding arch-rival Boeing's 737 MAX airliner, grounded since last March after two deadly crashes. But production issues with the European group's own single-aisle A320 jet family may limit its ability to respond.

Setbacks with the A321's new "ACF" cabin design have been mostly resolved, Faury said, and Airbus is likely to increase single-aisle production by "one or two" planes per month in each of the two years after hitting its target rate of 63 in 2021.

The group also announced a deal to buy Canadian group Bombardier's remaining stake in the A220 jet programme, part of a market for smaller passenger planes shaping up to be another major battleground with Boeing.

'WHAT WAS INAPPROPRIATE IS BEHIND US'

Airbus played down the potential damage from the virus outbreak rattling airlines and the broader global economy - endorsing traffic growth forecasts that "assume no major disruptions, including from the coronavirus."

Faury acknowledged some Chinese airlines had requested "very short-term" postponements of new jet deliveries that he described as logistical. Airbus is targeting about 880 commercial jet deliveries this year.

The bribery settlement, which has prompted investigations by foreign governments and some protests that they were not forewarned, remains positive for the "vast majority" of ongoing customer relationships, the Airbus CEO said.

"It's very important to show that face and make sure what was inappropriate is behind us," Faury said. "There are a few cases that need to be mitigated ... but not that many."

Raising its proposed dividend by 9% to 1.80 euros per share, Airbus predicted full-year free cash flow of around 4 billion euros, up from 3.509 billion in 2019.

The A400M earnings hit comes on top of billions of past charges for Europe's biggest defence project, which has been a financial thorn in Airbus' side for more than a decade.

The programme delivered 14 planes in 2019, on schedule, but now faces "increasingly challenging" obstacles including repeated extensions to a German export ban on Saudi Arabia, Airbus said. The group said it expected about 2 billion euros in further related losses by mid-decade.

For the fourth quarter, adjusted operating income fell 9% to 2.81 billion euros, ahead of the 2.74 billion expected by analysts, according to an Airbus poll. Quarterly revenue rose 4% to 24.31 billion euros. 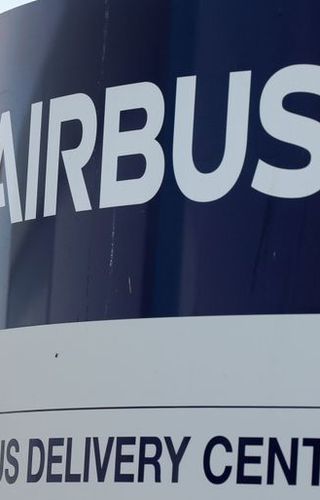